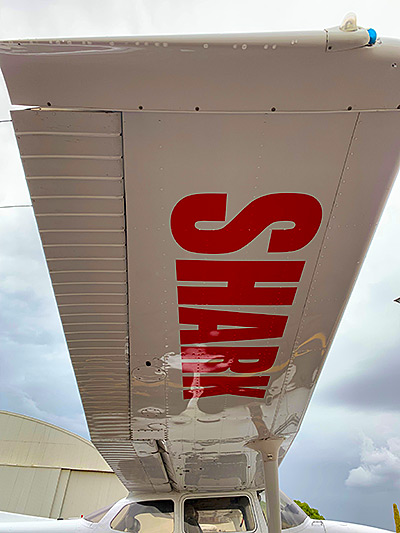 Since 2003 the South Australian Government has provided fixed wing aerial patrols of highest risk beaches during the summer season.  Administered by the South Australian Fire and Emergency Services Commission (SAFECOM) in conjunction with the SA State Emergency Service, patrols run daily along the metropolitan coastline between North Haven and Rapid Head (Rapid Bay), and extend to the south coast beaches between Rosetta Head (Victor Harbor) and the mouth of the River Murray.

The fixed wing aircraft has the words ‘SHARK PATROL’ in large lettering on the wing underside, and is fitted with a siren to warn beachgoers.

In the event of sighting a shark that may pose a risk to the public, the aircraft will fly continuous circles over the area and sound the siren, at which time people should immediately leave the water.  At the same time, the South Australia Police will be advised and will manage the response to the sighting in the course of business, which may include advising Surf Life Saving SA and other relevant organisations and agencies.

Flights commence in the first week of December each year and run through until Easter, subject to ongoing risk assessments.

How to report shark sightings

Water users are urged to report shark sightings as soon as possible.

Call SA police on 000 to report sharks that pose an immediate danger to human life.

Call the Fishwatch hotline on 1800 065 522 to report sightings of large sharks that do not pose a threat to human life.